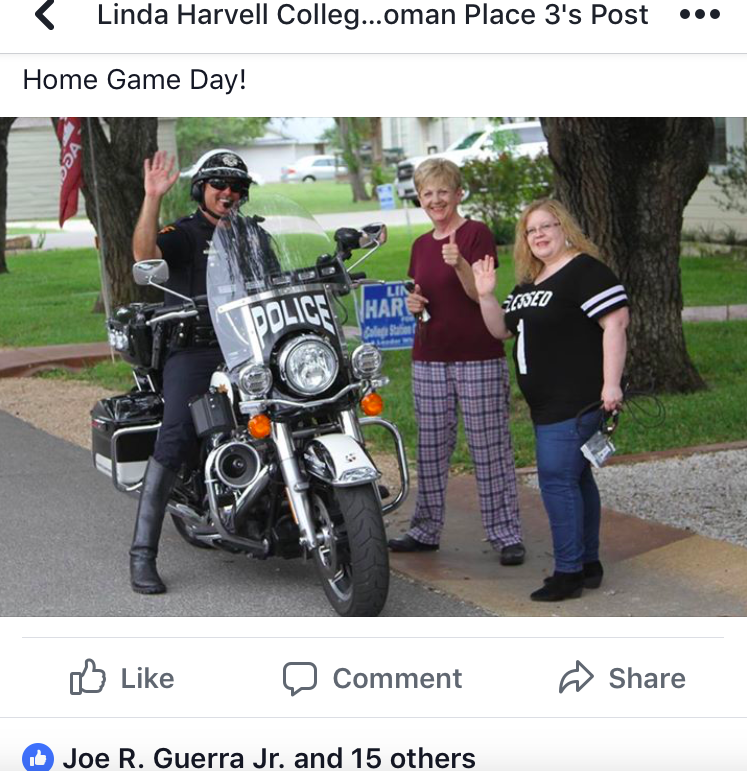 The photo was posted to the Harvell campaign facebook page on November 4, three days prior to the 2017 city council election for which Harvell was campaigning. It features the officer in his CSPD uniform, on a CSPD motorcycle, posing with Candidate Harvell in front of a campaign sign.

After a comment was posted to the photo, pointing out a potential Hatch Act violation, the Harvell campaign deleted the post. It can be a violation of the Hatch Act for an officer in a department that receives federal funding to “allow one’s name or likeness to be used in campaign literature in the police officer’s professional capacity.” As Federal funds (referred to on page 54 of the City of College Station 2017-18 budget) contribute to CSPD operations, the Hatch Act may apply to the officer’s conduct.

The conduct was reported to College Station Police Department’s professional standards division. No disciplinary action was taken pertaining to the officer’s decision to utilize city resources, namely his uniform, gear, and vehicle, to appear in a photograph with a candidate in a local election.

CSPD Professional Standards Lt. Thomas Brown’s response to a complaint concerning the officer’s posing in uniform on a police vehicle for a photo, with a candidate and in front of a campaign sign, for a political campaign photo was: “The allegations contained in this complaint were thoroughly reviewed and no evidence was found of a policy or procedure violation.”